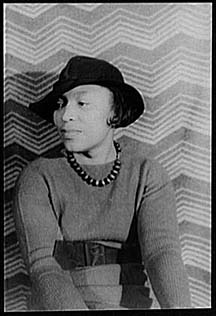 Her father was a Baptist preacher, tenant farmer, and carpenter.  At age three her family moved to Eatonville, Fla., the first incorporated black community in America, of which her father would become mayor. In her writings she would glorify Eatonville as a utopia where black Americans could live independent of the prejudices of white society.

A novelist, folklorist, and anthropologist, Zora Neale Hurston was the prototypical authority on black culture from the Harlem Renaissance. In this artistic movement of the 1920s black artists moved from traditional dialectical works and imitation of white writers to explore their own culture and affirm pride in their race. Zora Neale Hurston pursued this objective by combining literature with anthropology.  She first gained attention with her short stories such as "John Redding Goes to Sea" and "Spunk" which appeared in black literary magazines. After several years of anthropological research financed through grants and fellowships, Zora Neale Hurston's first novel Jonah's Gourd Vine was published in 1934 to critical success. In 1935, her book Mules and Men, which investigated voodoo practices in black communities in Florida and New Orleans, also brought her kudos.

The year 1937 saw the publication of what is considered Hurston's greatest novel Their Eyes Watching God. And the following year her travelogue and study of Caribbean voodoo Tell My Horse was published. It received mixed reviews, as did her 1939 novel Moses, Man of the Mountain. Her autobiography Dust Tracks on a Road was a commercial success in 1942, despite its overall absurdness, and her final novel Seraph on the Suwanee, published in 1948, was a critical failure.

Zora Neale Hurston was a utopian, who held that black Americans could attain sovereignty from white American society and all its bigotry, as proven by her hometown of Eatonville. Never in her works did she address the issue of racism of whites toward blacks, and as this became a nascent theme among black writers in the post World War II ear of civil rights, Hurston's literary influence faded. She further scathed her own reputation by railing the civil rights movement and supporting ultraconservative politicians. She died in poverty and obscurity.

Zora Neale Hurston was much responsible for the Harlem Renaissance being the watershed event in black America as delineated through literature that it was.  Despite that she would later fall into disrepute because of her rigid views about civil rights, her earthy lyrical writing which lionized southern black culture has influenced generations of black American literary figures.

The early life of Zora Neale Hurston has been shrouded in mystery.  While the majority of biographical accounts list the year of her birth as 1901, just as many list 1903, and in recent years 1891.  For many years her birthplace was said to have been Eatonville, Fla. (the setting of many of her writings), however, recent evidence has placed it as Notasulga, Ala.  Zora was the fifth of eight children of John and Lucy Ann Potts Hurston.  Her father was a Baptist preacher, tenant farmer, and carpenter.  At age three her family moved to Eatonville, the first incorporated black community in America with a then population of 125, and of which her father would later become mayor.  To Zora Eatonville would become a utopia, glorified in her stories as a place black Americans could live as they desire, independent of white society and all its ways.  The death of her mother when she was thirteen was a devastating event for Zora as she was "passed around the family like a bad penny" by her father for the next several years.

Upon reaching adulthood Zora was working as a domestic, still leading an itinerant life, with little schooling.  She was in Baltimore in 1917, when through the aid of her employer she entered in Morgan Academy (the high school division of Morgan College (now Morgan State University).  Though twenty-six years old at enrollment, she listed her age as sixteen and 1901 as the date of her birth.  With her graduation in 1918, she matriculated at Howard University in Washington, D.C.  Here she was inspired by the professor of philosophy and authority on black culture Alain Locke and decided to pursue a literary career.  In 1921, her first short story "John Redding Goes to Sea" that was set in Eatonville was published in the Howard literary magazine The Stylus.  In the following years she contributed several more stories to various magazines.  One of these "Spunk" was published in the black journal Opportunity and caught the attention of such poets as Langston Hughes and Countee Cullen, who were active in a nascent artistic movement called the Harlem Renaissance.  Zora transferred to Barnard College, an affiliate of  Columbia University, where she was offered a scholarship in anthropology (she would take her B.A. in 1928).  And being in New York City she quickly became a recognized member of the movement.

The Harlem Renaissance was a period during which black artists broke with the traditional dialectal works and imitating white writers to explore black culture and express pride in their race.  This was expressed in literature, music, art, in addition to other forms of artistic expression.  Zora and her stories about Eatonville became a major force in shaping these ideals.  Additionally, she combined her studies in anthropology with her literary output.  Studying under the famed professor of anthropology Franz Boas, she undertook field research (1927-1932) in the south with a fellowship from the Association for the Study of Negro Life and History during which she collected folklore and interviewed a former slave.  Her results where published in the article "Cudjo's Own Story of the Last African Slaves" in 1927, which forty-five years later was found to have been plagiarized from Historic Sketches of the Old South by Emma Langdon Roche (1914).  In 1930, Zora and Langston Hughes collaborated on a play Mule Bone: A Comedy of Negro Life.  However, they became embroiled in a dispute over who deserved credit and the play never saw production.

Through a Rosenwald Fellowship (1934) and a Guggenheim Fellowship (1935-1936) Zora engaged in her most fruitful anthropological field research which produced her finest literature.  In 1934 her first novel Jonah's Gourd Vine was published.  Set in the fictional Sanford (a thinly disguised Eatonville), it tells of Jonah, a black Baptist preacher who is abundant in emotion and has a weakness for women.  The New York Times critic Margaret Wallace stated it was "the most vital and original novel about the American Negro that has yet been written by a member of the Negro race."  In 1935 Mules and Men was published.  An investigation of voodoo practices in black America in focused on Florida and New Orleans in excellently recorded the folkways and songs of the rural south along with its main topic-the detail of which Zora gained from her own participation.  The critic Lewis Gannett of the New York Herald Tribune stated: "I can't remember anything better since Uncle Remus."

From 1936 to 1938, Zora studied in Jamaica and Haiti on a Guggenheim Fellowship.  This laid the groundwork for Tell My Horse (1938), a travelogue and a study of Caribbean voodoo.  The reviews were mixed: praising it as vivid, keen, and humorous and criticizing it as tedious, sensationalistic, and misrepresentative.  Notwithstanding, Zora's second novel Their Eyes Were Watching God (1937), which took place in Eatonville and told the story of a quadroon named Janie and her three marriages was in general praised as beautiful, touching, and irresistible.

In 1939, Zora's second-to-last novel Moses, Man of the Mountain was published.  A modern version of the biblical story with a black voodoo magician named Moses as the main character, it was credited as being realistic and poetic, but it drew criticism for, as cited by the critic Louis Untermeyer, being unfulfilling as a whole though the characters were painted convincingly.  In the following years Zora's literary output was sporadic.  Her autobiography Dust Tracks on a Road (1942) and was a commercial success.  Although written vividly and wittily, it suffered from gross inaccuracies as Zora attempted to paint a picture of her life according to the fantasy world she idealized.  Her final novel Seraph on the Suwanee (1948), was set in Florida in the early twentieth century and oddly enough was about a white family named Meserve.  Generally the critics considered this book unconvincing, though Zora's writing ability was noted.

Throughout her literary career Zora garnered much criticism for her failure to address the subject of racism as meted out by the white American society in her portrayals of black society.  Zora seemed to view the entire world from the perspective of Eatonville, a place that blacks could be sovereign from all of white society, even the segregation that enveloped it as a southern town.  Many of her contemporaries felt she was not seeing the whole picture, and as the civil rights movement burgeoned in the years after World War II and the majority of black writers adopted this as a theme, Zora's literary appeal waned.  Then her reputation was scathed in 1948 when she was arrested for molesting a ten-year-old retarded boy; the charges were later dropped.

Despite this scandal, it was much of Zora's own doing that tarnished her reputation.  She wrote an article in 1950 attacking the right of blacks to vote in the south, charging that votes were being bought.  Then she railed the desegregation ruling in Brown vs. the Board of Education of Topeka, Ks. in 1954, on the grounds that black children do not need to go to school with white children in order to learn; to this many civil right leaders took umbrage.  Zora wrote for such right wing publications as American Legion Magazine and campaigned for the ultraconservative Senator Robert Taft of Ohio for the GOP presidential nomination in 1952.  This only alienated black America more and more.

Poverty and obscurity marked Zora's last years, during which she worked mostly as a domestic-as she had started out.  She worked on a book The Life of Herod the Great, but never completed it.  Illness finally overcame her when she suffered a severe stroke in 1959, after which she was committed to the Saint Lucie County Welfare Home in Fort Pierce, Fla.  It was here that Zora Neale Hurston died of hypertensive heart disease on Jan. 28, 1960.

For all the opprobrium that Zora Neale Hurston received later in her career, the brilliance of her literary works cannot be denied.  Future black writers such as Ralph Ellison, Toni Morrison and Alice Walker were greatly influenced by her books, and ironically they have addressed the issue of prejudice in their books.  And any aspect of black culture that remains preserved today and continues to enlighten us owes its status in one way or another to Zora Neale Hurston.

"Mama exhorted her children at every opportunity to “jump at de sun.” We might not land on the sun, but at least we would get off the ground." ~ Zora Neale Hurston

This page may be cited as:
Women in History. Zora Neale Hurston biography. Last Updated: 2/20/2013. Women In History Ohio.
<http://www.womeninhistoryohio.com/zora-neale-hurston.html>