African-American delegate to the U.N., opera singer, speaker and educator 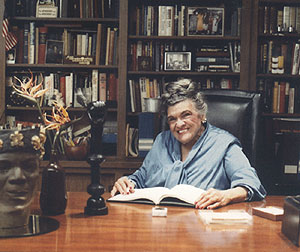 Zelma George was the daughter of Samuel and Lena Thomas.  After working as a social worker in Illinois and a Dean at Tennessee State University, she married and moved to Los Angeles where she founded and directed the Avalon Community Center. This marriage ended in divorce and she married for the second time after coming to Cleveland to study African American music. She married attorney Clayborne George in 1944. She had no children.

Zelma George obtained a Sociology Degree from the University of Chicago and studied voice at the American Conservatory of Music. She earned advanced degrees from New York University in Personnel Administration and Sociology. She studied African American music after obtaining a Rockefeller Foundation grant.

Zelma George had quite a resume of experience and education, from working as a social worker and college dean to being active in music and theater. After moving to Cleveland to study African American music at the Cleveland Public Library, she wrote Chariot's a Comin!, a musical play based upon her research of this subject. She went on to headline in The Medium, an opera by Gian-Carlo Menotti, at Karamu Theater. People consider her to be one of the first Black women to assume this typically White role. In the 1950's Zelma George served on national government committees during the Eisenhower administration: she was a good-will ambassador and an alternate U.S. delegate to the United Nations General Assembly from 1960-61. On a return trip home from lecturing at Bethune-Cookman College, she stopped in Orlando to visit relatives. During a delay at their airport, she took a seat in a waiting room and was approached by a police officer to leave the room: "Get out you Yankee trouble-maker or I'll throw you out!" She responded angrily to the room of 75 people:

"I am a United States delegate to the United Nations. Not long ago I returned from a round-the-world lecture tour at the request of the State Department. I was trying to create for people in foreign lands an image of my country as a land where all men are created equal and freedom is everyone's birthright. Is there no one in this room who will stand up for me now?" There was no one who spoke up for her.

From 1966-74 she was the Director of the Cleveland Job Corps where it experienced tremendous growth. Even in her retirement and after the death of her husband, she lectured, wrote and taught at Cuyahoga Community College in the Elders Program; her classes were extremely popular due to her experience, knowledge and passion. She died in Shaker Heights. Today, there is shelter for homeless women and children named in her honor.

She received the Dag Hammerskjold Award, the Edwin T. Dahlberg Peace Award and was selected by the Greater Cleveland Women's History Committee as one of the "Women Who Shaped Cleveland."  She was awarded the Daughter of Ohio award by the Civic Recognition Committee of Ohio for Statewide Honors.

This page may be cited as:
Women in History. Zelma Watson George biography. Last Updated: 2/9/2013. Women In History Ohio.
<http://www.womeninhistoryohio.com/zelma-watson-george.html>