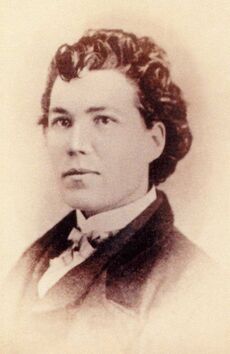 Edmonds was born in New Brunswick, Canada, and lived on a farm near the coast of Maine. She fled at the age of 15 to the United States to escape an abusive father and an arranged marriage. She dressed as a man to avoid being found, and to travel and work independently. She was a very successful Bible salesman in Connecticut.

With the outbreak of the Civil War, Edmonds wanted to serve her country, so she enlisted as a man in Company F of the 2nd Michigan Infantry. She served as both a nurse and a mail carrier, but when her close friend was killed, she volunteered to take his place as a Union spy. She travelled into enemy territory to gather information using various disguises:  a black man, and Irish peddler woman, a black laundress, and a Confederate captain.
After being injured by a horse and contracting malaria, she fled the army to avoid being discovered a woman.
Even after the war, when her identity was revealed, Sarah Emma Edmonds was remembered as a fearless soldier by her fellow soldiers. She sued the government for a pension and she won. Later she wrote her own autobiography and was inducted into the Michigan Women’s Hall of Fame.

"I am naturally fond of adventure and a little ambitious, and a good deal romantic-but patriotism was the true secret of my success.” ~ Sarah Emma Edmonds

This page may be cited as:
Women in History. Sarah Emma Edmonds biography. Last Updated: 3/31/2021. Women In History Ohio.
<http://www.womeninhistoryohio.com/sarah-emma-edmonds.html>