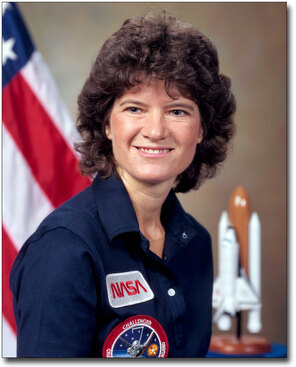 Sally Ride was a scholar, a trailblazer, and a woman of many “firsts.” She became, at age 32, both the youngest American astronaut and the first American female astronaut in space. Her commitment to excellence was evident through her high school years, in higher learning at various higher learning institutions, and ultimately graduated with her Doctorate degree in Physics from Stanford University. Her career at NASA allowed her to travel into space twice, on two Space Shuttle Challenger missions, both in 1983 and 1984. Dr. Ride never sought fame or desired being in the spotlight. Far from it. Her goal was to do her job and do it well.

​Sally Ride’s life was cut short. She died July 23rd, 2012, at the age of 61 after a 17-month bout with pancreatic cancer. Friends and co-workers noted the main goal in her last days was to make certain her company, Sally Ride Science, continued to inspire young people to pursue careers in the sciences. In May of 2013, about a year after her death, President Barack Obama announced she would receive the Presidential Medal of Freedom. In March of 2022 the Sally Ride quarter was released by the U.S. Mint as part of a program to pay tribute to the contributions of notable American women.

"The stars don't look bigger, but they do look brighter." ~ Sally Ride

This page may be cited as:
Women in History. Sally Ride biography. Last Updated: 1/6/2023. Women In History Ohio.
<http://www.womeninhistoryohio.com/sally-ride.html>