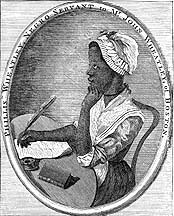 Phillis Wheatley was a slave child of seven or eight and sold to John and Susanna Wheatley in Boston on July 11, 1761.  Her first name was apparently derived from the ship that carried her to America, The Phillis.

During her life, while it was not common for American women to be published, it was especially uncommon for children of slaves to be educated at all.  Her gift of writing poetry was encouraged by her owners and their daughter, Mary;  they taught Phillis to read and write, with her first poem being published at the age of twelve, "On Messrs. Hussey and Coffin." The countess of Huntingdon, Selina Hastings, was a friend of the Wheatley's who greatly encouraged and financed the publication of her book of poetry, Poems.  Obour Tanner, a former slave who made the journey through the middle passage with Phillis also was one of the chief influences and supporters of Phillis' craft.

She was especially fond of writing in the elegiac poetry style, perhaps mirroring the genre of oration taught to her through the women in her African American tribal group.  Her elegy on a popular evangelical Methodist minister, George Whitefield, brought her instant success upon his death.  She also was well versed in Latin which allowed her to write in the epyllion (short epic) style with the publication of "Niobe in Distress."

Phillis' popularity as a poet both in the United States and England ultimately brought her freedom from slavery on October 18, 1773.   She even appeared before General Washington in March, 1776 for her poetry and  was a strong supporter of independence during the Revolutionary War.  She felt slavery to be the issue which separated whites from true heroism: whites can not "hope to find/Deivine acceptance with th' Almighty mind" when "they disgrace/And hold in bondage Afric's blameless race."

Phyllis is remembered for many first time accomplishments from a woman of her day:

This page may be cited as:
Women in History. Phillis Wheatley biography. Last Updated: 3/2/2013. Women In History Ohio.
<http://www.womeninhistoryohio.com/phillis-wheatley.html>