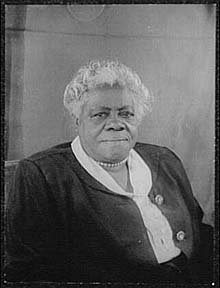 One of 17 children of Samuel and Patsy McLeod, former slaves. Mary worked in the cotton fields with her family. Married Albertus Bethune and had a son.

Founded the Daytona Normal and Industrial Institute for Negro Girls (now Bethune-Cookman College) in 1904, and served as president from 1904-1942 and from 1946-47. Was a leader in the black women's club movement and served as president of the National Association of Colored Women. Was a delegate and advisor to national conferences on education, child welfare, and home ownership.Was Director of Negro Affairs in the the National Youth Adminstration from 1936 to 1944. Served as consultant to the U.S. Secretary of War for selection of the first female officer candidates. Appointed consultant on interracial affairs and understanding at the charter conference of the U.N. Founder of the National Council of Negro Women. Vice-president of the NAACP. Was awarded the Haitian Medal of Honor and Merit, that country's highest award. In Liberia she received the honor of Commander of the Order of the Star of Africa.
Mary McLeod Bethune as portrayed by Madelyn Sanders

"From the first, I made my learning, what little it was, useful every way I could."  ~ Mary McLeod Bethune

This page may be cited as:
Women in History. Mary McLeod Bethune biography. Last Updated: 1/14/2013. Women In History Ohio.
<http://www.womeninhistoryohio.com/mary-mcleod-bethune.html>