Mary Ann was the eldest child of thirteen children born to Harriet and Abraham Shadd, established leaders in the free Black community. Her father was a key figure in the Underground Railroad and a subscription agent for William Lloyd Garrison's Liberator. As a child, Mary Ann witnessed slavery and the dedication her family had to freeing slaves. Mary Ann Shad married Thomas F. Cary of Toronto in 1856. They had two children, Sarah and Linton. They lived in Chatham, Canada where Mary worked at her paper and taught school. Thomas died in 1860.

At the age of ten, the Shadd's moved to West Chester, Pennsylvania where Mary attended a Quaker School for the next six years. This experience influence dMary later in life, whereby she returned to this location and opened a school for Black children in 1840. Later, she also taught in New York City and Norristown, Pennsylvania.

Mary Ann Shad Cary is noted for her attacks on slavery and promotion of self-reliance. Her gift of writing in a both elegant and targeted way attracted readers to her ideas. She preached against those who took advantage of freed slaves and tried to teach these slaves how to be self reliant. In 1850 the Fugitive Slave Law was passed and Mary and her brother, Isaac, emigrated to Canada with the rest of the American Black exodus. In Canada, Mary founded a racially integrated school in Canada with the support of the American Missionary Association. At this time she joined abolitionists Mary and Henry Bibb to fight against exploitive antislavery agents known as "begging agents." She simultaneously criticized Black Southern ministry and other Blacks who did not teach intellectual growth and self reliance to other Blacks. In 1852 she wrote "Notes on Canada West" which pursuaded American Blacks to come to Canada.

After the decline of her paper, Mary moved to Washington D.C. and served as a recruiting officer for the Union Army, promoting Black nationalism. In Washington, Mary established a school for Black children and attended Howard University Law School; she became the first Black female lawyer in the United States when she graduated in 1870.

As a lawyer she worked for the right to vote and was one of few woman to receive the right to vote in federal elections. She organized the Colored Women's Progressive Franchise in 1880 which was dedicated to women's rights.

"Self-reliance Is the Fine Road to Independence."
From the paper which served as her voice and in which she served as editor, publisher, and investigative reporter, Provincial Freeman. ~ Mary Shadd Cary 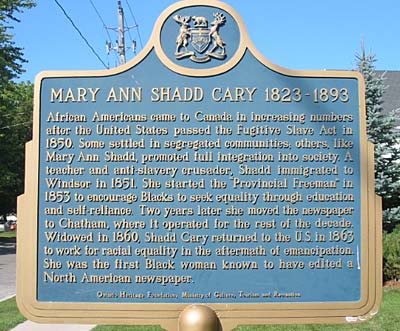