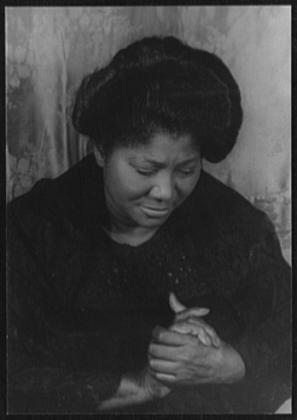 Mahalia was the third child to John A. Jackson, a barber and preacher, and Charity Clark, who died at the age of 25 when Mahalia was four years old. In 1916, her father sent her to live with her aunt Mahalia "Duke" Paul. Aunt Duke didn't allow secular music in her house, but Mahalia's cousin would sneak in records. Even at a very young age, Mahalia had a booming voice and she would sing hymns and old-time gospel tunes around the house.

Mahalia attended the McDonough School No. 24 in New Orleans through the eighth grade.

Mahalia Jackson is viewed by many as the pinnacle of gospel music. Her singing began at the age of four in her church, the Plymouth Rock Baptist Church in New Orleans. Her early style blended the freedom and power of gospel with the stricter style of the Baptist Church. As a teenager, through her cousin's aid, she was influenced by such famous singers as Bessie Smith, Ida Cox, Enrico Caruso and Ma Rainey, and her own style began to emerge into a more soulful expression. In 1927, at the age of 16, she moved to Chicago and found work as a domestic. But soon after, she found plenty of work as a soloist at churches and funerals after joining the Greater Salem Baptist Church choir. Her unique contralto voice caught the attention of many small churches from coast to coast. Larger, more formal churches frowned upon her energetic renditions of songs. After performing with the Prince Johnson Singers, she began recording for Decca Records in 1937. When the records did not sell as well as expected, she became a beautician. However, after five years of touring with composer Thomas A. Dorsey at gospel tents and churches, Mahalia's popularity and success garnered her another record contract, this time with Apollo Records, from 1946 to 1954. She then switched to Columbia Records, from 1954 to 1967, where she attained broad recognition as a spiritual singer.

Throughout the 1950s, Mahalia's voice was heard on radio, television and concert halls around the world. Her shows were packed in Europe, and her audience very enthusiastic at the 1957 Newport Jazz Festival, at a special all-gospel program she requested. In 1954, she began hosting her own Sunday night radio show for CBS. She performed on the Ed Sullivan show in 1956 where she catapulted gospel music into America's mainstream. She sang for President Dwight Eisenhower and at John F. Kennedy's inaugural ball in 1960.

From the 1955 Montgomery Bus Boycott until her death, Mahalia was very prominent in the Civil Rights Movement. Very close with Dr. Martin Luther King Jr., she often performed at his rallies--even singing an old slave spiritual before his famous "I Have a Dream" speech at the March on Washington in 1963. She also sang at his funeral five years later.

Despite her doctors ordering her to slow down, Mahalia refused and collapsed while on tour in Munich in 1971. She died of heart failure on January 27, 1972, at her home in Evergreen Park, Illinois.

"Roll up your sleeves, set your mind to making history, and wage such a fight for liberty that the whole world will respect our sex." ~ Carrie Chapman Catt

This page may be cited as:
Women in History. Mahalia Jackson biography. Last Updated: 2/20/2013. Women In History Ohio.
<http://www.womeninhistoryohio.com/mahalia-jackson.html>