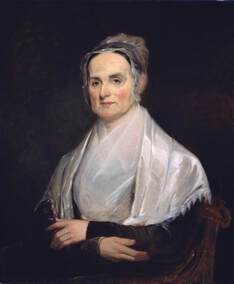 ​Lucretia Coffin was born on the whaling island of  Nantucket in 1793 to Quaker parents Thomas Coffin, Jr. and Anna Folger.   She was a distant cousin of Benjamin Franklin.  Lucretia’s 6th generation grandfather, Tristam Coffin, bought Nantucket in 1659 …  for 30 BPS and 2 Beaver Hats.   In 1811 she wed James Mott, Jr and remained married for 56 years.

After finishing the 8th grade, Lucretia’s parents sent her to Nine Partners Quaker Boarding School in New York where she was taught the same subjects as the boys in the school – a rare practice.    Nantucket and the Quaker philosophy offered more social equality than was typical for late 18th century.

Her earlier life was spent working for the abolition of slavery.  It did not take Lucretia long to realize that the condition of women and that of the slave were related, and that securing equal rights for one group would necessitate demanding them for the other.

Lucretia helped to draft the Declaration of Sentiments at Seneca Falls in 1848.  She was the first to sign the Declaration which is recognized as the founding document of the Women’s movement.  Her contemporaries included Elizabeth Cady Stanton, Sojourner Truth, Susan B. Anthony, Lucy Stone, Thomas Mann and William Lloyd Garrison and Frederick Douglass.

She was a founder of Swarthmore College, the Moore College of Art, and the Female Medical College of Pennsylvania.

"I have no idea of submitting tamely to injustice inflicted either on me or on the slave. I will oppose it with all the moral powers with which I am endowed. I am no advocate of passivity.​" ~ Lucretia Coffin Mott

This page may be cited as:
Women in History. Lucretia Coffin Mott biography. Last Updated: 3/9/2021. Women In History Ohio.
<http://www.womeninhistoryohio.com/lucretia-coffin-mott.html>