Founder of the American Girl Scouts 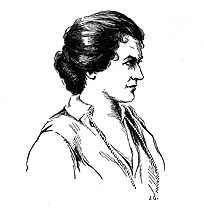 Born Juliette Magill Kinzie Gordon, she was from a prominent southern family; her father was a Confederate Captain in  the Civil War. After the Civil War ended, he joined a volunteer militia in Savannah. The volunteers were called up during the Spanish American War and Mr. Gordon was commissioned as a general in the volunteers.

The scouting movement owes its success to many historical figures, one of the foremost of which is Juliette Gordon Low, who founded the Girl Scouts of America in 1912. Her vision, benevolence and fortitude has enabled thousands of girls to grow up into fine upstanding citizens in the last fourscore and seven years. Born Juliette Magill Kinzie Gordon, she was called "Daisy" from the beginning. Growing up she was educated in all the finest boarding schools and exhibited aptitude in sculpting and an interest in animals. When she was about 25 years old, Juliette had an ear infection which was treated with silver nitrate. This damaged her ear and caused her to lose a great deal of her hearing in that ear.

In 1886, Daisy married William Mackay "Willy" Low, a British heir. During the ceremony, a grain of wedding rice lodged in her good ear and became infected. When the doctor attempted to remove the rice, it damaged the nerves in her ear and caused total deafness in that ear. For most of their nineteen years of marriage the Lows resided in Willy's native Great Britain. Although they frequented many social events, the union ultimately became unhappy as Willy took to drinking and philandering. They were in the process of divorce when William Mackay Low died suddenly of paralysis in 1905. He left the bulk of his estate to his mistress, leaving Daisy quite dejected. She spent the next several years globetrotting through Europe and India.

While attending a luncheon in England in 1911, she met Lord Robert Baden-Powell, founder of the British Boy Scouts, through whom she became keenly interested in the scouting movement. During that year she organized a troop of Girl Guides (the female equivalent of the Boy Scouts) among poor girls at her estate at Glenlyon, Scotland, and then founded two more troops in London. Then on March 12, 1912, Daisy established the first troop of Girl Guides in the United States in her native Savannah.  Through her steadfast promotion the movement grew rapidly, becoming the Girl Scouts of America in 1913. The organization was incorporated in 1915 with the national headquarters at Washington, D.C., with Daisy serving as president until 1920 when she was bestowed the rightful title of founder.

For fifteen years Daisy devoted her time, energy, and finances to the movement. She elicited major support and contributions from communities all around and was a frequent guest at campfires. In an attempt at expanding her organization she tried to merge with the Campfire Girls, however, this failed to materialize due to administrative disputes. Daisy oversaw the composition of the Girl Scout handbook How Girls Can Help Their Country and in 1919 she was naturally the representative at the first international meeting of Girl Scouts and Guides.

In personality Daisy was known for being eccentric and charming.  At an early scout board meeting she stood on her head to display the new Girl Scout shoes that she happened to be wearing. Especially because her work was so hands-on she was revered by young girls far and wide.

In 1923 Daisy contracted cancer.  She kept her illness a secret and dauntlessly continued her efforts. She was instrumental in organizing the world Girl Scout camp in the United States in 1926.  Less than a year later, on Jan. 17, 1927, Juliette Gordon Low died of cancer in Savannah, at the age of sixty-six.  The membership in the Girl Scouts by this time numbered 168,000.  She was buried in the uniform representing the organization she founded which to this day continues to change the world.

This page may be cited as:
Women in History. Juliette Gordon Low biography. Last Updated: 2/23/2013. Women In History Ohio.
<http://www.womeninhistoryohio.com/juliette-gordon-low.html>