Wife of Ulysses S. Grant, 18th President of the United States, was a determined woman who despite family objections married the man she loved. Outspoken, she also created her own plans for ending the Civil War and holding a secret Presidential Inauguration. 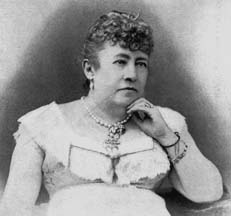 Julia Dent Grant was the fifth of eight children (four boys and four girls) born to "Colonel" Frederick Dent, a successful St. Louis plantation owner, and Ellen Bray Wrenshall Dent of Pittsburgh, at White Haven, a typical Southern estate.  She was raised Methodist; her maternal grandfather, John Wrenshall, being a Methodist minister. She was short and rather stocky, with a determined look in her eye, but apparently had a sparkle and charm, along with a ready smile, that softened her features.

Julia's mother was raised in a cultured, educated manner, so she made sure all of her children, including the girls, were educated as well. Julia attended the local school run by John F. Long, then enrolled in the Mauro Boarding School for seven years in St. Louis. She liked the literature courses -- reading The Dashing Lieutenant and saying she wanted to marry a soldier one day -- but disliked math.

Julia returned home in 1844 and met Ulysses Simpson Grant for the first time when he came to visit his West Point roommate and Julia's older brother, Frederick T. Dent. She and Ulysses both loved novels and were raised as strict Methodists. He admired her spirit and she shared his love of horses. Colonel Dent envisioned his favorite daughter marrying someone wealthy, so after four months of courtship, the couple became engaged but kept it a secret. Ulysses was only earning a soldier's salary in the Army. After a year of secret engagement, Ulysses asked the Colonel for his daughter's hand, and her father reluctantly approved, but the marriage would have to wait out the Mexican War. Ulysses wrote to Julia regularly and, after three years, returned to White Haven and married Julia at her family's house, on August 22, 1848. They spent their four-month honeymoon in Louisville, Kentucky, and visiting Ulysses's parents in Ohio (they disapproved of the Dents' being slaveholders and did not attend the wedding). It was Julia's first trip away from home.

Their first four years of marriage were spent on Army bases in Detroit and Sackett's Harbor, New York. Not needing to learn cooking and domestic skills as a child, Julia learned them here for the first time. Their first child, Frederick Dent Grant, was born on May 30, 1850, back home in St. Louis; followed by Ulysses S. Grant, Jr. on July 22, 1852 (nicknamed "Buck" because he was born in Ohio at Ulysses' parents' house); Ellen (Nellie) Wrenshall Grant on July 4, 1855; and Jesse Root Grant on February 6, 1858.

Julia was extremely devoted to her husband and family, and he to them. But it was not an easy life. They were separated for two years when Ulysses was stationed on the Pacific Coast. Although he had been put in command of infantry divisions, he was forced to resign for insubordination. He returned home in 1854, and then failed at everything he tried to do. Julia's father gave them land to build a house and farm; they called it "Hardscrabble." They didn't have much success farming, and the Panic of 1857 financially ruined it. White Haven also failed. Ulysses tried working as a rent collector, but failed at that, too. By 1860, they had moved to Galena, Illinois, where Ulysses worked at his father's harness and tanning business. Then the Civil War began and changed everything.

Experienced officers like Ulysses were in short supply. He was sent to make a disciplined fighting unit out of a rebellious volunteer regiment in Illinois. No one else had been able to tame them. Ulysses drilled them almost to death and led them in several successful attacks with guerrilla Confederate groups. He was promoted to brigadier general. He's been both praised and criticized for his willingness to fight, even if it cost soldiers' lives. When he trapped the main Confederate army south of Richmond, forcing their surrender in April, 1865, Ulysses ended the bloody Civil War -- and became the most revered man in the Union.

During the war, Julia tended wounded soldiers and sewed uniforms. She also joined her husband as often as was safe and took enormous pride in his accomplishments. Unlike many officers, Ulysses insisted that Julia be with him. Her steady nature, cheerfulness, and common sense helped him stay focused. He often would succumb to doubts, depression and alcoholism (which became a problem when he was on the Pacific Coast) and Julia helped buoy his spirits. After President Lincoln appointed Ulysses as Commander of the Army of the Potomac, in 1864, he would send for Julia to join Ulysses, knowing she was a good influence. Julia also became the center of attention -- something she grew to love.

As the war ended, with Ulysses a hero, the Grants were given gifts, honors and even a house in Galena. With Lincoln's assassination, followed by President Johnson's impeachment, Ulysses rode the tide of popularity all the way to the White House in 1869, serving for two terms. Julia transformed the then-shabby White House into one of elegance and warmth, welcoming visitors with grace and compassion. She was described by many as unpretentious and friendly. The media wrote of her "propriety and dignity." After not speaking during the war, Julia's father moved in with them. Her goal was to create a comfortable home for her family; Ellen was 14 years old and Jesse was 11.

Julia was the first First Lady to serve eight full years since Elizabeth Monroe. She ordered new rugs, furniture, wallpaper and chandeliers, and had the White House thoroughly cleaned. In 1873, she had Grecian columns added to the facade, by the Army Corps of Engineers. The china she purchased, with a yellow border and flowers, remains among the handsomest ever to grace State Dinners. Julia banned smoking, except Ulysses's cigars. Male servants wore dress suits and gloves, and an exceptional cook gave dinners an opulence and splendor rarely seen before or since. Imported French wine flowed and 25-course meals sometimes lasted four hours.

Julia opened the White House on Tuesday afternoons with receptions for "any and all" -- even saying, "Admit all," when asked about colored visitors. However, the staff denied entrance to such visitors without Julia's knowing. Senators' and Cabinet members' wives delighted at being included in receiving lines. Although, Julia might have done this because strabismus (a wandering-eye disorder) necessitated help in identifying visitors. In 1874, Nellie was married in one of the most elaborate weddings ever held at the White House. The Grants bought a cottage at Long Beach in New Jersey, where they spent their summers. It was a wonderful time -- particularly after years of poverty, uncertainty and the horrors of war.

Knowing Julia loved being First Lady, Ulysses kept secret his decision to not seek re-election for a third term -- and she was extremely disappointed. She had returned the White House to its rightful position as the center of the country's social life. And yet she had managed to also make it a comfortable home for her family. Her last hostess function was a luncheon for newly elected President Rutherford and Lucy Hayes on Inauguration Day 1877. As Julia reluctantly ascended her carriage to leave the White House for the last time, she wept like a child.

Despite being a strong, capable, intelligent woman, Julia was never able to weild much political influence. Ulysses rarely listened to her; preferring her to tend to domestic matters. She did, however, fuel the rumor mill that she had helped her husband in the "Black Friday" controversy, when speculators attempted to corner the gold market. The story was that Ulysses wanted to curb the attempt, and dropped a hint to Julia to write her brother-in-law's wife to persuade him to drop out of the speculation. Ulysses did arrange the sale of the government gold and ended the panic, but history has proven that Julia had no part in this, nor did she receive a bribe for her intervention.

Major accomplishments of President Grant included getting the Fifteenth Amendment passed and signing the act to establish the first national park, Yellowstone, in 1872. But he was deeply haunted by his earlier failures; remaining loyal to anyone who had been nice to him, thus filling his administration with corrupt and incompetent people.

After leaving the White House, the Grants traveled the globe for two and a half years. It was a grand time -- meeting Queen Victoria and other political leaders, being guests of honor at state banquets, and having enthusiastic crowds surrounding them. Upon returning in 1879, their popularity was at its peak and people wanted their presence all over. They settled in a townhouse in New York City off Fifth Avenue. But by the 1880 convention, Ulysses's popularity was waning, as he failed to win the nomination for a third term.

Their son Buck had joined the Wall Street firm of Ferdinand Ward, and Ulysses then joined as a silent partner. However, Ward turned out to be a swindler, stealing investments and collapsing the firm -- scandalizing the Grants' reputations and leaving them in financial ruin. (He had forfeited his military pension upon entering politics, and no Presidential pension existed then.) Shortly after, Ulysses was diagnosed with incurable throat cancer, but he wanted to leave Julia financially supported. Racing against time, bundled in blankets and wracked with pain, he wrote his memoirs, hoping its sale would support his family. He finished it just days before his death on July 23, 1885, with Julia remaining by his side throughout. She was so overcome she couldn't attend his funeral. She was lost, frightened and severely depressed for quite some time. He was laid to rest in New York City.

Ulysses's memoirs -- prompted and arranged by his friend Mark Twain -- were a huge success, enabling Julia to move back to Washington, D.C. Living in comfort as a sort of "Grand Dame," she cultivated friendships with Frances Cleveland, Varina Howell Davis, Caroline Harrison and Edith Roosevelt. She also supported Susan B. Anthony and the suffragists. Nellie and her three grandchildren moved in with her. Over time, her mental state improved enough to write (dictate) her own memoirs -- being the first First Lady to do so -- covering the times that her husband's memoirs did not. She never found a publisher, however; Southern Illinois University finally published them in 1975.

On April 27, 1897, the General Grant National Memorial was dedicated with a parade and ceremony, and over a million people attending. Inside, mosaics depict scenes of his victories in the Battles of Vicksburg and Chattanooga, and Robert E. Lee's surrender at Appomattox. About 90,000 people from all over the world donated more than $600,000 to build the granite and marble structure designed by John Duncan. It remains the largest mausoleum in North America.

On December 14, 1902, Julia died at the age of 76. She was laid alongside her husband in the national monument.