Wife of John Fitzgerald Kennedy, 35th President of the United States of America.
​Lover of books, editor, philanthropist, passionate mother to her children. 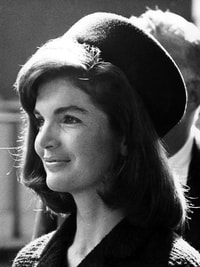 Jaqueline Lee Bouvier Onassis was born on July 28th, 1929, and spent her early years in Southampton, New York. She lived with her father, John, a stockbroker, her mother Janet, and her younger sister, Caroline. She was an accomplished equestrian and won several national championships for her horsemanship.

After completing her studies at Miss Porter's Boarding School in Connecticut, she began her college career at Vassar, spent a year studying in Paris, and completed her final year at George Washington University, graduating in 1950 with a Bachelor of Arts in French literature.

She married Senator John F. Kennedy on September 12th, 1953. They had three children, Caroline, John Jr., and Patrick, who died two days after birth, on August 9th, 1963. Jacqueline Kennedy brought a sense of grace and style to the White House. She became an international fashion icon, and, during her time as First Lady, was instrumental in spearheading the historic restoration of the White House. It was a
project that sparked nationwide interest, further highlighted when the First Lady hosted a nationally televised special to detail her work.

Once John F. Kennedy was assassinated on November 22, 1963, Mrs. Kennedy spent just two more weeks in the White House before moving to a home in Georgetown with her two children. Tragedy returned on June 6th, 1968 when her brother-in-law, U.S. Senator Robert F. Kennedy, was assassinated in Los Angeles, California.

On October 20th,1968 she married Greek shipping tycoon Aristotle Onassis. In 1975, Mr. Onassis died, making Jackie a widow for a second time. In the years following, she propelled her lifelong love of reading into a career, working at Viking Press and Doubleday as a book editor. She played a role in saving Grand Central Station in New York and worked to improve the Broadway Theatre District. In 1993, she was diagnosed with non-Hodgkins' Lymphoma and underwent treatment, but it did not halt the progression of the disease. She died at her New York apartment on May 19, 1994, at the age of 63. She was buried in Arlington National Cemetery in Arlington, Virginia, next to President Kennedy.

This page may be cited as:
Women in History. Jacqueline Kennedy (Onassis) biography. Last Updated: 12/30/2021. Women In History Ohio.
<http://www.womeninhistoryohio.com/jacqueline-kennedy.html>