Wife of William McKinley, 25th President of the United States
Developed a unique way of coping with her epileptic seizures during her public appearances as First Lady 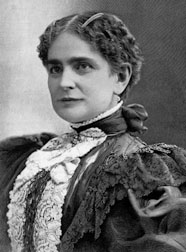 Puritan: A Journal for Gentlewomen ©ArtToday.com

Ida Saxton was the second of three children born to James A. and Katherine Dewalt Saxton. The Saxtons were a prominent force in Canton: Ida's grandfather, John Saxton, founded the Ohio Repository, the first newspaper in Canton and her father was a well respected banker and successful businessman.

Her father sent her to the best local Canton schools, to finishing school, and then on a tour of Europe.

As a young woman, she exhibited talent in financial matters and was a strong and independent woman. These traits earned her a position at her father's bank as a clerk and eventually she gained the experience and knowledge to manage the bank when her father left the city. Ida first met William McKinley at a picnic in 1868 and then again in 1870 while working at the bank. At their second meeting they fell deeply in love. McKinley was a young lawyer with a promising future; they were married on January 25, 1871. They formed a loving and devoted marriage.

The McKinleys had two daughters. Katherine ("Katie") was born on Christmas Day in 1871. Just after her first birthday, Ida's mother, whom Katie was named after, died. In April 1873, Ida gave birth to their second daughter, Ida, who tragically died at the age of four months. Phlebitis and epileptic seizures overcame Ida's health, only to have her condition worsen when Katie died in 1875, leaving Ida a confirmed invalid.

Despite her poor health, Ida remained supportive of and active in her husband's career as congressman, governor of Ohio, and president. She travelled with him whenever possible and lived with him in Washington. He accommodated his work and their life to suit her needs. He was greatly devoted to her and carefully and lovingly made sure she had everything she needed and wished for.

In the 1896 Presidential election, unfounded rumors began circulating about Ida's illness, so a campaign biography was written about her and added to her husband's biography. For the first time, a (future) First Lady's image appeared on a campaign pin. Ida tried to be at William's side as much as possible and he, in return, ran his campaign primarily from Canton to stay close to her.

While at the White House, the McKinleys didn't let Ida's health interfere with her role as First Lady. Beautifully dressed at formal receptions, Ida would receive guests while sitting in a blue velvet chair holding a fragrant bouquet, to politely refrain from shaking hands. Despite protocol, she always sat beside the President at state dinners; William always watching for signs of an impending seizure. If one came on, he would momentarily cover her face with a handkerchief or quickly wheel her out of the room. In those days, guests were discreet and newspapers silent about her "fainting spells."

After William was re-elected to his second term, he was shot on September 6, 1901. Even then, he thought of Ida; telling his secretary to be careful in how he told Ida the news. He lingered for eight days, Ida holding his hand, until he passed away on September 14, 1901. After his death, Ida returned to Canton to live with her younger sister, visiting her husband's grave almost daily. She lived primarily in seclusion, although she did receive President Theodore Roosevelt when he came to Canton. Ida passed away in 1907 and is buried at Canton's McKinley Memorial Mausoleum with her husband and two young daughters. 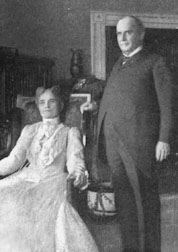 This page may be cited as:
Women in History. Ida Saxton McKinley biography. Last Updated: 2/23/2013. Women In History Ohio.
<http://www.womeninhistoryohio.com/ida-saxton-mckinley.html>