Born into slavery on Maryland's Eastern Shore, Harriet's ancestors had been brought to America in shackles from Africa during the first half of the 18th Century. Harriet was the 11th child born to Benjamin Ross and Harriet Greene (slaves of Edward Brodas), her given name was Araminta and she was often called "Minty" as a child. But by the time she was an adult, she was calling herself Harriet. As was the custom for many slaves, Harriet began working at an early age. When five years old, she was first sent away from home, "loaned out" to another plantation, checking muskrat traps in icy cold rivers. She quickly became too sick to work and was returned, malnourished and suffering from the cold exposure. Once she recovered, she was loaned out to another plantation, working as a nurse to the planter's infant child. By the age of 12, she was working as a field hand, plowing and hauling wood. At 13, while defending a fellow slave who tried to run away, her overseer struck her in the head with a two-pound weight. This resulted in recurring narcoleptic seizures, or sleeping spells, that plagued her the rest of her life.

In 1844, at about the age of 25, Harriet married John Tubman, a freeman. She gained permission to marry him from her owners and lived with him in his cabin, but she was required to continue working for her master. When Harriet told John of her dreams of one day gaining her freedom, he told her that she would never be free and, if she tried running away, he would turn her in. On one of her first return visits to Maryland, Harriet went to John's cabin in hopes of getting him to go north with her. She found that he had taken another wife. Later in 1869, she married Nelson Davis. She never had any children.

Because of her indentured status, Harriet was denied the opportunity for education -- leaving her illiterate her entire life. Slaveowners did not want their slaves to know how to read or write.

The Biblical story of Exodus in which Moses freed the Israelites from slavery in Egypt to freedom in Israel, saw repetition in the years before the Civil War when Harriet Tubman freed over 300 blacks from slavery in the South to freedom in the North. For her commendable work she herself was nicknamed "Moses." Despite the hardships inflicted upon her and the unfairness of them, Harriet used her labors for self discipline and set for herself the goal of escaping to the North. She accomplished this goal in 1849, when alone and on foot she ran away from the plantation in the middle of the night and followed the north star to free land in Pennsylvania. It came about after her master died and she heard rumors that she and two of her brothers were to be sold to a chain gang. Her brothers left with her, but became scared, deciding not to take the risk, and so returned to the plantation. She traveled only at night, until she knew she had crossed the border between slaveholding and non-slaveholding states. She later said:

"I looked at my hands to see if I was the same person now I was free. There was such a glory over everything ... and I felt like I was in heaven."

Harriet had bravely won her freedom, but realizing how alone she was, she made a vow that she would help her family and friends win their freedom as well. She went to Philadelphia, found work cooking, laundering and scrubbing, and saved money to finance rescue trips. She became involved with the city's large and active abolitionist (anti-slavery) organizations and with organizers of the Underground Railroad, a secret network through which slaves were helped in escaping from bondage in the South to freedom in the North and Canada.

Using the Wilmington, Delaware, home of Quaker abolitionist Thomas Garrett (1789-1871) as a checkpoint, Harriet Tubman undertook some 20 hazardous missions in which she covertly journeyed down south, pinpointed slaves, and led them to freedom up north, at times going as far as Canada. In leading these flights, with a long rifle in hand, she warned her escapees that, if any of them even considered surrendering or returning, the penalty would be death. Her persuasiveness was evident in that never on any of her missions did she lose a "passenger" on the Underground Railroad.  In addition to her nickname "Moses," for her bravery Harriet was dubbed "General" Tubman by the militant abolitionist John Brown, with whom she worked in Canada.  William Still (who recorded activities of the Underground Railroad) described her as:

"a woman of no pretensions, indeed, a more ordinary specimen of humanity could hardly be found among the most unfortunate-looking farm hands of the South. Yet, in point of courage, shrewdness and disinterested exertions to rescue her fellow-men ... she was without her equal."

Her name quickly spread throughout the slave quarters and abolitionist societies. All this angered the Southern slaveholders, who offered $40,000 for her capture. But Harriet always evaded slavecatchers and would not quit, even when her illiteracy nearly got her caught when she fell asleep under her own wanted poster.  As for her family, Harriet successfully rescued her sister in 1850, her brother in 1851, her other three brothers in 1854, and her parents in 1857.  For her parents, she purchased a home in Auburn, New York, from Senator William H. Seward of New York, an advocate of hers.  In the 12 years from her escape in 1849 to the beginning of the Civil War in 1861, Harriet Tubman and the Underground Railroad became the most dominant force of abolitionism.

Around 1858, Harriet teamed up with John Brown as he plotted a raid on Harper's Ferry, Virginia. His plan was to raid the armory there, distribute weapons among slaves and instigate a rebellion. She helped him with fund-raising, and most likely would have participated in the raid had she not been ill. Even in one of her last interviews, in 1912, she referred to him as "my dearest friend."

During the Civil War (1861-1865), Harriet Tubman served with the Union Army as a cook, laundress, nurse, scout, and spy behind Confederate lines. In 1862, she moved to Beaufort, South Carolina (when it was occupied by the Union Army), and with several missionary teachers, helped hundreds of Sea Islander slaves transition from bondage to freedom. She also undertook scouting and spying missions, identifying potential targets for the Army, such as cotton stores and ammunition storage areas. The Boston Commonweath described her efforts in July 1863:

"Col. Montgomery and his gallant band of 800 black soldiers, under the guidance of a black woman, dashed in to the enemies' country ... destroying millions of dollars worth of commissary stores, cotton and lordly dwellings, and striking terror to the heart of rebeldom, brought off near 800 slaves and thousands of dollars worth of property."

In 1865, Harriet began caring for wounded black soldiers as the matron of the Colored Hospital at Fortress Monroe, Virginia. She continued helping others after the war. She raised money for freedmen's schools, helped destitute children and continued caring for her parents. In 1868, she transformed her family's home into the Home for Aged and Indigent Colored People. She also lobbied for educational opportunities for freedmen. She believed she had been called by God to help her people, and once told an interviewer:

"Now do you suppose he wanted me to do this just for a day, or a week? No! the Lord who told me to take care of my people meant me to do it just so long as I live, and so I do what he told me to do."

Also in 1868, Harriet began working on her autobiography with Sarah Hopkins Bradford, a white schoolteacher in Auburn, New York. It was published in 1868, then later under a revised title in 1886 (see below). In 1869, Harriet married Nelson Davis, a Union veteran half her age who had been a boarder at her house. He died of tuberculosis in 1888.

Still not finished, Harriet took up the suffragist cause. In 1896, she was a delegate to the National Association of Colored Women's first annual convention. She believed the right to vote was vital to preserving their freedom. Around the turn of the century, she bought 25 acres of land near her home with money raised through benefactors and speaking engagements, and made arrangements for the African Methodist Episcopal Zion Church to take over the Home. She had worked closely with this church since the 1850s. Through it, she had come to befriend Frederick Douglass, who had briefly published his abolitionist newspaper, The North Star, there. In 1911, Harriet herself was welcomed into the Home. Upon hearing of her destitute condition, many women with whom she had worked in the NACW voted to provide her a lifelong monthly pension of $25. Living past ninety, Harriet Tubman died in Auburn on March 10, 1913. She was given a full military funeral and was buried in Fort Hill Cemetery. The women of the NACW also paid the funeral costs and purchased a marble headstone. One year later, the city of Auburn commemorated her life with a memorial tablet at the front of the Cayuga County Courthouse. In 1944, Eleanor Roosevelt christened the Liberty Ship Harriet Tubman, and in 1995 the U.S. Postal Service honored her life with a postage stamp. 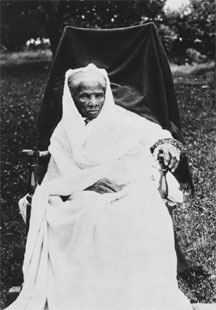 "There's two things I got a right to and these are Death and Liberty. If I could not have one, I would have the other."~ Harriet Tubman

This page may be cited as:
Women in History. Harriet Tubman biography. Last Updated: 2/27/2013. Women In History Ohio.
<http://www.womeninhistoryohio.com/harriet-tubman.html>