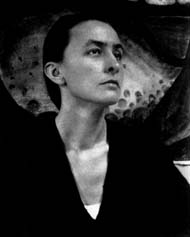 Ancestors were from Ireland and Hungary; her family were farmers.  She grew up in both Sun Prairie and Williamsburg, Virginia.

Graduated from the Chatham Protestant Episcopal Institute in Williamsburg, Va. in 1904.  Studied art at the Art Institute of Chicago and the Art Students League in New York.

The artistic brilliance of Georgia O'Keeffe revolutionized modern art in both her time and in the present.  With her paintings she vividly portrayed the power and emotion of objects of nature.  This was first seen in her charcoal drawings of silhouetted bud-like forms exhibited in 1916 that brought her fame.  During the 1920s , she explored this theme in her magnified paintings of flowers which to this day enchant people amorously, although her purpose was to convey that nature in all its beauty was as powerful as the widespread industrialization of the period.  After spending a summer in New Mexico, Georgia O'Keeffe, enthralled by the barren landscape and expansive skies of the desert, would explore the subject of animal bones in her paintings of the 1930s and 1940s.  Just as with the flowers, she painted the bones magnified and captured the stillness and remoteness of them, while at the same time expressing a sense of beauty that lies within the desert.

Georgia O'Keeffe was married to the pioneer photographer Alfred Stieglitz (1864-1946) in 1924.  It was at Stieglitz's famed New York art gallery "291" that her charcoal drawings were first exhibited in 1916.  The union lasted 22 years, until Stieglitz's death.

The paintings from the latter phase of Georgia O'Keeffe's career (after her move to New Mexico in 1949) concerned a rectangular door on an adobe wall and the sky.  These were far less inspiring than her earlier works-which continued to be rediscovered through her lifetime and to the present day.


Modern art in the 20th Century was a period of a vast creative revolution.  In recounting this era it would be negligent to forget to mention or to purposely omit the work of the singularly talented and unconventional painter Georgia O'Keeffe.  In her long career she became renown for her portrayal of a vivid, powerful and private sensibility in natural objects such as flowers, clouds, and most notably animal skulls and bones.  This combined with her use of thin paint and clear colors evoked feelings of mystical silence and put her years ahead of her time.

Of Irish and Hungarian ancestry, Georgia O'Keeffe was born on a farm in Sun Prairie, Wis.  She grew up an introspective child who did things her own way and decided early to become a painter because as she once said: "That was the only thing I could do that was nobody else's business."

As a teenager Georgia moved with her family to Williamsburg, Va., where she attended the Chatham Protestant Episcopal Institute, graduating in 1904.  During the next few years she studied at the Art Institute of Chicago and the Art Students League (New York).  She developed her artistic ability by painting still lifes; most successfully the oil on canvas Dead Rabbit With Copper Pot.  Though it won her a scholarship in its medium and was an early indication of her genius, it brought Georgia little personal satisfaction for she felt it differed little from the works of still life painters before her.  Ergo, she resolved to put painting aside for a while.  Briefly she was a freelance commercial artist in Chicago and then found a more pliable career for her art work in that of teaching.  In 1912, she became a teacher of art and supervisor of art for the public schools in Amarillo, Texas and in 1918 she became head of the art department at West Texas State Normal College in Canyon, Tx.

In these years Georgia studied the art theories of Arthur Wesley Dow, a lecturer of art at Columbia University.  Dow taught her that pictorial art must create its own two dimensional reality based on pure aesthetic principles and that composition must be abstract and based on line, color, light and dark masses, repetition, and symmetry.  These along with a state of isolation, emotional ferment, and solitude following a conflict with her boyfriend, cemented a theoretical and personal meaning in art for Georgia.  Free of artistic conventions and all their influence, Georgia resumed her painting, experimenting with oils and watercolors, as well as drawing in charcoal.

In 1916, Georgia's mailing some of her charcoal drawings to a friend in New York City would bring her inadvertent artistic immortality.  Ignoring Georgia's wishes, this friend showed the drawings to Alfred Stieglitz, the pioneer photographer, who exclaimed: "Finally, a woman on paper!"  He exhibited them at his famous art gallery "291" on 5th Avenue in New York City, and immediately they drew attention.  Georgia, a reticent person as always, was appalled and went to New York to demand their removal.  However, Stieglitz persuaded her to let them remain and to continue her art work in search of her own personal vision within abstract design.

The charcoal designs in this exhibit were of rounded, bud-like forms nestled in between a jagged silhouette and an undulating ripple.  Art critics thought them to be sexual much to Georgia's chagrin, for her main focus was femininity and tenderness.  In 1917, Stieglitz presented a solo exhibition of her work and in the summer of 1918, Georgia relinquished her teaching position and moved to New York City.  Here she became a member of  Stieglitz's circle of painters whom he patronized such as John Marin, Marsden Hartley, Arthur Dove and Charles Sheeler.  Additionally, she became a model for Stieglitz in a series of sensuous photographs in which she posed in the nude.  Moreover, Georgia O'Keeffe and Alfred Steiglitz–though 23 years her senior and married with a daughter–became lovers.

The whole decade of the 1920s saw the flourishing of Georgia O'Keeffe's artistic talent.  The most important of her art work from this period is her paintings of flowers, as exemplified in Black Iris III and Red Poppy.  These, as well as others, possessed a certain style that Georgia broke artistic ground with: magnification.  In this Georgia would enlarge the painting subjects to intensify their specific identity, increase their importance, and dramatize their emotional power.  Part of the meaning behind these paintings was to prove nature's equality with industrialization.  Georgia painted her flowers as large and as noticeable as the skyscrapers being built nascent in the cities via the prosperity of the "Roaring Twenties."

The vibrating fragility and intimate centrality of Georgia's flowers led some art critics to liken them to female genitalia, consequently they believed Georgia was interpreting the Freudian sexuality rampant in "Roaring Twenties" society.  In truth they saw only half the picture (no pun intended): Georgia used the flowers as a sexual metaphor to arouse enchantment with its beauty.  Other important paintings include: Canna, Red and Orange, Calla Lily in Tall Glass II, White Calla Lily with Red Background, and Petunia II.

In 1926, Georgia O'Keeffe began to paint from the industrialization end of the spectrum with images of urban landscapes and skyscrapers which include: City Night; Shelton Hotel, New York #1; The Shelton with Sunspots; Radiator Building-Night, New York; New York with Moon; East River from the Shelton; Ritz Tower, Night; and New York Night.  In these Georgia captured the height and distance of the structures in addition to the atmosphere in which they stand: the daylight or nighttime, the sky, the wind, etc.  However, other characteristic urban components such as automobiles, streets, and people were not portrayed.  In fact Georgia O'Keeffe never in her entire career painted people or any living creatures.

In 1929, Georgia spent a summer in New Mexico, where she was mesmerized by the dry magical landscape and broad desert skies.  From this she painted what remains one of her most compelling paintings entitled Black Cross, New Mexico.  In this Georgia depicted a somber, intimidating, monolithic black cross, literally devouring the earth and sky behind it.  However, the succulently rippled purple and red hills and the horizon preserver.  This juxtaposing of stern order and riotous passion would be a recurring theme in Georgia's paintings.

It was also during this artistically fruitful decade that Georgia would be joined in matrimony to Alfred Stieglitz.  After living together for six years, Stieglitz persuaded Georgia to marry him as soon as his divorce from his wife of thirty-one years was final.  With that the sixty-year-old Alfred Stieglitz and the thirty-seven-year-old Georgia O'Keeffe were married on Dec. 11, 1924.

In the 1930s, Georgia O'Keeffe began painting another subject which would enhance her prestige as an artist.  These were animal bones, in particular cow skulls.  Just as with the flowers, Georgia enlarged, centered, and simplified the bones on the barren desert.  Her depiction were of quietude, remoteness, and perseverance along with the beauty of the desert that is so often unrecognized.  In some cases she painted the bones even more enigmatically by adorning them with flowers painted in the same vein as her previous works.  Probably, the most enigmatic from this period is Cow's Skull with Calico Roses (1931).

These years would be personally difficult ones for Georgia however.  In 1933 she suffered a nervous breakdown and was hospitalized, curtailing her painting for about a year.  Also, Alfred had begun to be bothered by recurrent heart problems.  Nonetheless, they both continued their work.

Georgia continued to paint animal bones and in the 1940s focused the subject on the pelvis.  Depicting birth and infinity she painted the pelvis suspended in the sky both abstractly and realistically; the sky was painted to appear clear and endless.  An example of this is Pelvis With Moon (1943).

On July 13, 1946, Alfred Stieglitz died of a stroke at the age of eighty-two.  He and Georgia had been married twenty-two years.  It would take Georgia three years to settle his estate and her painting became sporadic.  In 1949, she moved to Abiguiu, New Mexico and began painting again, but the emotion seen in her earlier works had faded. During the 1950s she painted a series based on a rectangular wooden door on an adobe wall.  While majestic, these paintings were very formal and less inspiring.

In 1959, after a world tour by airplane, Georgia painted the Sky Above Clouds series based on an aerial view.  The most notable painting of which was her largest work, a twenty-four foot mural entitled Sky Above Clouds IV (1965), in which the clouds are painted rhythmically on a placid sky, depicting peace above earth.

Despite that her later art work was less potent than her earlier ones, Georgia's retrospective paintings were exhibited at the Intimate Gallery, An American Place, the Museum of Modern Art, the Whitney Museum, and other places through the 1960s and 1970s,  In 1970, Georgia received a well deserved honor in that of the gold medal for painting of the National Institute of Arts and Letters.  Then in 1977 President Gerald Ford presented her with the Presidential Medal of Freedom.

It was unfortunate that by this time Georgia was losing her eyesight and could not paint unassisted.  Ultimately she was totally blind and was forced to move in with her assistant in Santa Fe, New Mexico.

A final triumph for Georgia was in April 1985, when President Ronald Reagan awarded her the National Medal of Arts.  A little less than a year later on March 6, 1986, Georgia O'Keeffe died in Santa Fe at the ripe old age of ninety-eight.  The brilliance of her art work has proven timeless as it continues to intrigue and inspire people.  This phenomena has been maintained in a variety of ways, notably the Georgia O'Keeffe Museum in Santa Fe that opened in 1997.

"I get out my work and have a show for myself before I have it publicly. I make up my own mind about it–how good or bad or indifferent it is. After that the critics can write what they please. I have already settled it for myself so flattery and criticism go down the same drain and I am quite free." ~ Georgia O'Keeffe

This page may be cited as:
Women in History. Georgia O'Keeffe biography - extended. Last Updated: 2/23/2013. Women In History Ohio.
<http://www.womeninhistoryohio.com/georgia-okeeffe.html>