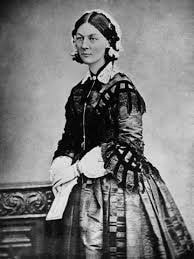 Florence was born into aristocracy.  Her grandfather was a member of parliament.   As such she was well placed in English society.

Florence and her sister Parthenope were well educated in Languages, Mathematics, History and Philosophy.  Florence was particularly adept at mathematics.  However, as she pointed out, once educated, she was taught to do nothing with what she had been taught.  She was, in brief, a Victorian woman.

Florence chaffed at the enforced inactivity of the women of her class.  She managed to get some training in nursing, so that when the Crimean war began, she was prepared.  However, it took a direct request from the British Government to persuade her father to let her go.

Once in the Crimea, her work laid the foundation of modern nursing.  Following the war, she established the Florence Nightingale School of Nursing and published “Notes on Nursing” which sold 15,000 copies in one month in 1859.

She became the first female member of the Statistical Society of London.

Florence Nightingale is the best documented Victorian woman after Queen Victoria herself.  The British Library has almost 200 bound volumes of her papers.

This page may be cited as:
Women in History. Florence Nightingale biography. Last Updated: 3/9/2021. Women In History Ohio.
<http://www.womeninhistoryohio.com/florence-nightingale.html>