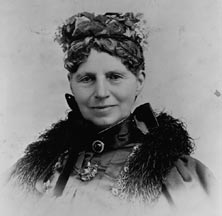 Clara was the daughter of Captain Stephen and Sarah (Stone) Barton.  Her father was a respected farmer, horse breeder and politician.  The youngest of five children, most of her education came from her two brothers and two sisters.  Although a shy child, she accelerated early in her studies:  by the time she was 4 years old, Clara could easily spell complicated words. Her instinctual gift of nursing started at the young age of 11 when she nursed her brother David through a serious illness.

Clara Barton became a teacher in Massachusetts at the age of 17;  founded her own school six years later and after ten years of teaching, felt the need to alter her career path.  She then pursued writing and languages at the Liberal Institute in Clinton, New York.

Following these studies, Barton opened a free school in New Jersey.  The attendance under her  leadership grew to 600 but instead of hiring Barton to head the school, the board hired a man instead.  Frustrated, she moved to Washington D.C. and began work as a clerk in the U.S. Patent Office; this was the first time a woman had received a substantial clerkship in the federal government.

With the emergence of the Civil War, Barton refused to take a salary from the government's treasury and dedicated herself aiding soldiers on the front.  Never before had women been allowed in hospitals, camps or on battlefields;  initially, military and civil officials declined her help.  Eventually, she gained the trust of these officials and began receiving supplies from all over the country.  As a result of her untiring work, she became known as the "Angel of the Battlefield."  Officially, she became the superintendent of Union nurses in 1864 and began obtaining camp and hospital supplies, assistants and military trains for her work on the front.  She practiced nursing exclusively on battlefields, experiencing first-hand the horrors of war on sixteen different battlefields.

After the war, President Lincoln granted her the ability to begin a letter writing campaign to search for missing soldiers through the Office of Correspondence.  Later in her life, Barton continued to search for missing soldiers and also became involved in the suffragist movement.  In 1869, she traveled to Europe for rest as directed by her doctor.  In Europe she was educated about the concept of the Red Cross as outlined in the Treaty of Geneva and also by observing the Red Cross while traveling with volunteers serving in the Franco-Prussian War.  Twelve nations had signed the treaty but the United States had not.  She returned to the United States; rallied to have the US join in this treaty; and vowed to establish this work in the United States.  Barton expanded the original concept of the Red Cross to include assisting in any great national disaster;  this service brought the United States the "Good Samaritan of Nations" label.  The United States ultimately signed the Geneva Agreement in 1882 .

Barton was the President of the American National Red Cross for twenty-two years.  Under her leadership, she adopted the framework of the Red Cross to fit the needs of the United States not only during wartime but in peacetime.  The Red Cross's early work included aiding victims and workers in the floods of the Mississippi and Ohio Rivers in 1882 and 1884, the Texas famine of 1886, the Florida yellow fever epidemic in 1887, an earthquake in Illinois in 1888, and the 1889 Johnstown, Pennsylvania disaster/flood.  Internationally, countries noticed and recognized the need for such peacetime assistance and in 1884 the Geneva Convention passed the "American Amendment" to include this concept.  The first wartime experience for the American Red Cross was in the Spanish-American War in 1898.

Barton also was highly dedicated to fighting for and furthering the rights of women;  she worked closely with Susan B. Anthony, Lucy Stone and others.  Barton herself was the most decorated American woman, receiving the Iron Cross, the Cross of Imperial Russia and the International Red Cross Medal.  Her final act was founding the National First Aid Society in 1904.  She retired as President of the American Red Cross at the age of 83 and spent her remaining years in Glen Echo, Maryland where she died from complications of a cold.

Clara Barton's two "rules of action" were "unconcern for what cannot be helped" and "control under pressure."

"An institution or reform movement that is not selfish, must originate in the recognition of some evil that is adding to the sum of human suffering, or diminishing the sum of happiness. I suppose it is a philanthropic movement to try to reverse the process." ~ Clara Barton

This page may be cited as:
Women in History. Clara Barton biography. Last Updated: 1/12/2013. Women In History Ohio.
<http://www.womeninhistoryohio.com/clara-barton.html>