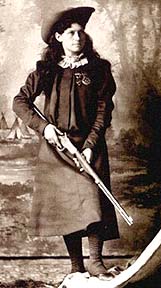 Named Phoebe Ann by her mother, but called Annie by her sisters, Annie promoted the Mozee spelling of the family name. While it has been variously recorded as Mauzy and Moses, Mosey is the version most commonly found in family sources. She took the stage name Oakley, reportedly after Oakley, Ohio.

Quaker parents Jacob and Susan were originally from Pennsylvania. After a tavern fire ended their livelihood as innkeepers, they moved to a rented farm in Ohio. Father, who had fought in the War of 1812, died in 1866 from pneumonia and overexposure in freezing weather. Annie was the fifth of seven children. Her mother remarried, had another child and was widowed a second time. During this time Annie was put in the care of the superintendent of the county poor farm, where she learned to embroider and sew. She spent some time in near servitude for a local family where she met with mental and physical abuse. When she reunited with her family, her mother had married a third time.

Whether it be a pistol, rifle, or shotgun, the legendary markswoman Annie Oakley was masterful with them all. Dubbed "Little Sure Shot" by Chief Sitting Bull (she was 5 feet tall), her sharp shooting in Buffalo Bill's Wild West Show won her many awards and captivated audiences far and wide. Her name remains synonymous with firearms and entertainment. Born in a log cabin on the Ohio frontier, Annie Oakley began shooting game at age nine to support her widowed mother and siblings. She quickly proved to be a dead shot and word spread so much that at age sixteen, Annie went to Cincinnati to enter a shooting contest with Frank E. Butler (1850-1926), an accomplished marksman who performed in vaudeville. Annie won the match by one point and she won Frank Butler's heart as well. Some time later they were married and she became his assistant in his traveling shooting act. Frank recognized that Annie was far more talented and relinquished the limelight to her, becoming her assistant and personal manager. In 1885 they joined Buffalo Bill's Wild West Show, run by the legendary frontiersman and showman Buffalo Bill Cody.

For seventeen years Annie Oakley was the Wild West Show's star attraction with her marvelous shooting feats. At 90 feet Annie could shoot a dime tossed in midair. In one day with a .22 rifle she shot 4,472 of 5,000 glass balls tossed in midair. With the thin edge of a playing card facing her at 90 feet, Annie could hit the card and puncture it with with five or six more shots as it settled to the ground. It was from this that free tickets with holes punched in them came to be called "Annie Oakleys." Shooting the ashes off a cigarette held in Frank's mouth was part of the Butler and Oakley act. In a celebrated event while touring in Europe, Wilhelm, Crown Prince of Germany, invited Annie to shoot a cigarette held in his own lips. Annie had Wilhelm hold the cigarette in his hand and not his mouth; she accomplished this challenge, as always effortlessly. In this period Annie Oakley was easily recognizable by the numerous shooting medals that adorned her chest.

In a train wreck in 1901, Annie suffered a spinal injury that required five operations and even left her partially paralyzed for a while. Although she recovered very well, Annie toured less frequently during the latter part of her career. Nonetheless, her shooting expertise did not wane and she continued to set records. In a shooting contest in Pinehurst, N.C. in 1922, sixty-two-year-old Annie hit 100 clay targets straight from the 16 yard mark.

Annie Oakley died of pernicious anemia on Nov. 3, 1926, in Greenville, Ohio, at the age of sixty-six. A legend in her own time, the remarkable life of Annie Oakley would be celebrated in the 1946 Herbert and Dorothy Fields musical Annie Get Your Gun.

In her life, Annie overcame poverty, mistreatment and physical injury with her determination and strength of character. She played a role in breaking barriers for women with her talent and accomplishments in her sport. She showed great compassion and generosity to orphans, widows and other young women.

This page may be cited as:
Women in History. Annie Oakley biography. Last Updated: 2/23/2013. Women In History Ohio.
<http://www.womeninhistoryohio.com/annie-oakley.html>