Aviatrix, first woman to be a passenger on a transatlantic flight and co-navigated the first round-the-world flight. 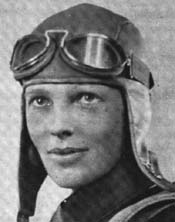