In 1853, Abbie's father, Sam Burgess, was appointed Lighthouse Keeper at Matinicus Rock. Abbie was one of ten children. She had two older sisters, one older brother; five younger sisters; her youngest sibling was a boy. She married Isaac Grant, son of Capt. John Grant, the keeper of Matinicus after her father. They had four children: Francis, Melvina, Mary Louise and Harris. [This information is courtesy of Abbie's great granddaughter, Patricia Grant.]

Although her father and father-in-law held the title of Lighthouse Keeper at Matinicus Rock, it was Abbie that was in charge of the work. In 1873, Isaac was appointed Keeper at White Head Light Station and he and Abbie tended the lights there. Abbie received the appointment of assistant keeper at White Head in 1875. She retired from there in 1890 due to illness. 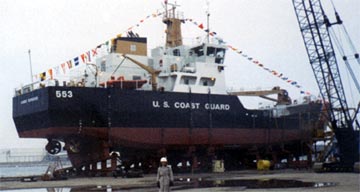 This page may be cited as:
Women in History. Abbie Burgess Grant biography. Last Updated: 1/30/2013.Women In History Ohio.
<http://www.womeninhistoryohio.com/abbie-burgess-grant.html>