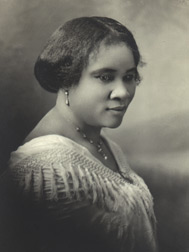 Photo courtesy of the A'Lelia Bundles/Madam Walker Family Collection/Wash, D.C. may not be reproduced without permission

Sarah Breedlove, who later became known as Madam C. J. Walker, was born into a former-slave family to parents Owen and Minerva Breedlove. She had one older sister, Louvenia and brothers Alexander, James, Solomon and Owen, Jr. Her parents had been slaves on Robert W. Burney's Madison Parish farm which was a battle-staging area during the Civil War for General Ulysses S. Grant and his Union troops. She became an orphan at age 7 when her parents died. To escape a yellow fever epidemic and failing cotton crops, the ten year old Sarah and her sister moved across the river to Vicksburg in 1878 to obtain work. At the age of fourteen, Sarah married Moses McWilliams to escape her sister's abusive husband. They had a daughter, Lelia (later known as A'Lelia Walker, a central figure in the Harlem Renaissance). When Lelia was only two years old, McWilliams died.  Sarah's second marriage to John Davis August 11, 1894 failed and ended sometime in 1903. She married for the third time in January, 1906 to newspaper sales agent, Charles Joseph Walker;  they divorced in 1912.

Madam Walker was an entrepreneur who built her empire developing hair products for black women. She claims to have built her company on an actual dream where a large black man appeared to her and gave her a formula for curing baldness. When confronted with the idea that she was trying to conform black women's hair to that of whites, she stressed that her products were simply an attempt to help black women take proper care of their hair and promote its growth. 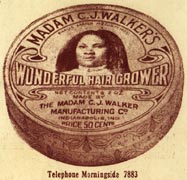 Illustration courtesy of the A'Lelia Bundles/Madam Walker Family Collection/Wash, D.C. may not be reproduced without permission 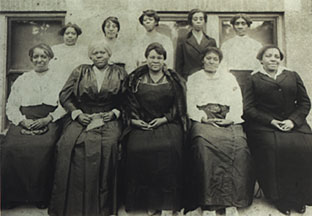 Madam Walker (front row center) with some of her Cleveland, Ohio agents. Photo courtesy of the A'Lelia Bundles/Madam Walker Family Collection/Wash, D.C. may not be reproduced without permission