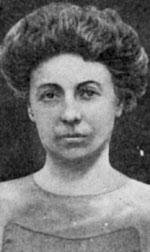 Helen “Nellie” was the fourth child (of 11 children) born to John Williamson Herron and Harriet Collins Herron. John was a lawyer and, at one time, was a law partner of Rutherford B. Hayes. In 1877, the Herrons were invited for a two-week visit to the Hayes at the White House, where Lucy Hayes Herron (named for First Lady Lucy Hayes) would be christened. Nellie became enamored of the White House and decided someday she wanted to live there. She vowed to forgo the convent only if she married a man who would be President.

Nellie attended Miss Nourse’s school in Cincinnati with one of her sisters. While there, she met Fanny Taft, only sister of her future husband. She loved music and studied it enthusiastically. She then attended Miami University, studying German, literature, history and the sciences. After graduating, she studied music at the University of Cincinnati. She considered becoming a lawyer, but did not pursue it; although it did teach her an appreciation of logic, politics and presenting a strong argument. She found church work unappealing and considered a musical career, but questioned the depth of her talent.

After completing her schooling, Nellie started a Sunday afternoon literary salon and briefly taught at two schools. Teaching was frustrating (particularly disciplining the boys) but rewarding. At a sledding party, she met William Howard Taft, a young attorney, and invited him to the literary salon. It was a long and rocky courtship. William was ardent and proposed a few times, but Nellie turned him down, saying he did not value her opinions. They did stay together and were able to joke with each other. Finally he was able to convince her that she was smarter and prettier than any other woman he knew. On June 19, 1886, Nellie and William married in Cincinnati. They had an extensive honeymoon in Europe, returning to Cincinnati where Nellie designed their home. They would have three children: Robert (born in 1889), Helen (1891) and Charles (1897). William was currently a U.S. Judge on the Ohio Supreme Court, although Nellie felt he should aim higher. In 1890, President Harrison appointed William as U.S. Solicitor General. They moved to Washington on Dupont Circle, where they met Theodore and Edith Roosevelt. Nellie loved living in the Capitol, but it was short-lived. In 1892, Harrison was defeated for a second term and William was elected as a judge to the U.S. Circuit Court. The Tafts returned to Cincinnati. There, Nellie became involved in improving the Cincinnati Symphony Orchestra.

In 1899, President McKinley appointed William as Commissioner to the Philippines. William waffled on the decision, but Nellie urged him to accept. She first toured China and Japan with her children, then joined William in Manila. They lived there four years, during which time Nellie fell in love with the culture and broadened her horizons, and William was appointed as governor-general of the Philippines. When a threat of typhus fever came, Nellie had cows sent in so fresh milk would be available. She opened up the palace to everyone and insisted her family learn Spanish. At one point, William was sent to the Vatican to negotiate a transfer of church lands to the Philippine state. Nellie accompanied him and even had an audience with Pope Leo XIII.

In 1904, President Theodore Roosevelt appointed William as his secretary of war, so the Tafts returned to Washington. In 1906, offering his support, Roosevelt asked them which position William wanted: president or chief justice. William wanted the latter, but Nellie chose the former. She met with Roosevelt privately and William’s choice was overruled.

In 1908, William Taft was elected President and Nellie saw her dream come true. Through their friendship with outgoing President Roosevelt, the Tafts broke with tradition and spent the night before the inauguration as guests in the White House. Nellie also broke with inaugural tradition by accompanying her husband in the inaugural parade down Pennsylvania Avenue. (Formerly, the outgoing President traveled with the incoming President, but Roosevelt had already left Washington and the carriage seat was vacant.) Every First Lady since then has followed her example.

Because she strived so diligently in the role of First Lady, Nellie took on too many projects at the same time. In mid-May 1909, she suffered a major stroke while on the presidential yacht, paralyzing her left side and leaving her unable to speak. The media was given little information about it and, for the next year, she was seen only occasionally. Her daughter and sisters took over her duties. With William’s patient help and her determined effort, Nellie regained her speech, but with hesitation. She also regained her ability to walk, but with difficulty. By 1911, however, she was back in control and celebrated their 25th wedding anniversary at the White House.

Despite all of her physical hardships, Nellie was able to accomplish several things, one of which was enhancing the White House, Tidal Basin and Potomac Park with cherry trees. She was concerned that people had no place to listen to music or walk when the weather was good. The Tidal Basin and Potomac Park areas were being renovated and Nellie planned the design based on Manila’s Luneta, an oval drive with a bandstand at each end that serves as a great meeting place for the city. Upon finding out that Nellie was going to have Japanese cherry trees planted along the “speedway” (now Independence Avenue), a Japanese chemist and Japanese consul facilitated the donation of an additional 3,020 Japanese cherry trees from the mayor of Tokyo.

On March 27, 1912 (after three years of planning and setbacks), First Lady Helen Taft and the Viscountess Chinda, wife of the Japanese Ambassador, planted the first two (Yoshino) cherry trees on the northern bank of the Tidal Basin, just south of Independence Avenue. After the ceremony, Nellie presented a bouquet of "American Beauty" roses to Viscountess Chinda. Washington's famous Cherry Blossom Festival originated in this simple ceremony, witnessed by only a few people. The two original trees still stand near the John Paul Jones statue at 17th Street, with bronze plaques commemorating the event. The annual blooming of the cherry blossoms every spring remains a fitting memorial to Nellie.

In addition, Nellie bought automobiles for the White House to replace the now outdated carriages. She had a large bathtub installed, as the existing one was too small for her 350-pound husband. She had the staff begin wearing matching uniforms. She made it easier for African-Americans to find employment at the White House, and hired a female housekeeper (Elizabeth Jaffray), in place of the steward, who remained there until President Coolidge’s term. She managed every detail of running the executive mansion. She insisted on comparison shopping and reviewed every expenditure. She even managed their personal budget so well that, after four years, she had set aside $100,000 for the family bank account.

Nellie was very versed in politics, often sitting in on important political discussions and accompanying William on political trips and golf outings. In 1912, the Republican Party was split between William and Roosevelt. Nellie was the first First Lady to attend the convention. This split nearly broke her heart and, long before the election, she began packing. She knew the split would mean a victory for the democratic candidtate, Woodrow Wilson.

From 1913 to 1921, the Tafts lived in New Haven, Connecticut, where William taught law at Yale University and Nellie traveled. Her stroke had enabled her to see that her husband did not need her constant prodding. Their marriage had become stronger, she stopped worrying, and she realized that William had his own ambitions. In 1914, she became the first First Lady to publish her autobiography, “Recollections of Full Years.”

In 1921, after Chief Justice White died, President Harding appointed William to the position – fulfilling his dream. Nellie loved being back in Washington, giving help and advice to Mrs. Harding and Mrs. Coolidge. In 1930, William passed away and Nellie continued to travel to Europe and visit her grandchildren, as well as watch her son Robert make his own successful career as a Senator from Ohio.

On May 22, 1943, Nellie Taft passed away. She was less than a month away from her eighty-second birthday. She was buried in Arlington Cemetery next to her husband – the first and only First Lady to be so, until Jackie Kennedy Onassis was buried beside John F. Kennedy in 1994.

This page may be cited as:
Women in History. Helen Herron Taft biography. Last Updated: 2/27/2013. Women In History Ohio.
<http://www.womeninhistoryohio.com/helen-herron-taft.html>