Shoshone Native American woman who traveled the Louisiana Purchase with Lewis and Clark, the Corps of Discovery and her son Pomp 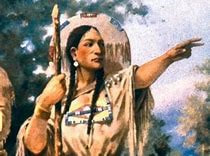 Sacajawea may also be spelled Sakakawea or Sacagawea or Tsakakawias. There is much debate about the meaning of her name. It is believed to mean either “Bird Woman”, “Boat Pusher” or “Burden”.   Before her name was changed, it is believed she was called “Huichu” or “Boinav”, which may mean “Little Bird.”  She was born in the Bitterroot Mountains of east central Idaho to the Lemhi-Shoshone Nation.

According to legend, she was between the ages of 9-13 when she was captured by the Minnetaree or Hidatsa nation, who enslaved her and changed her name.  After 5 years of working, they sold her to the Mandan nation, who then sold her to a French-Canadian fur trapper and trader named Toussaint Charbonneau.

Lewis and Clark hired Charbonneau to interpret native languages and as a guide, but he did not speak Shoshone.  Being a Shoshone, Sacajawea knew Shoshone, sign language and several other native languages. She would be able to help trade with the Shoshones for horses that would get the expedition across the mountains.  It was likely she also wanted to go so that she could see her family again.

During the Journey of Discovery, Sacajawea gave birth to a baby boy named Jean Baptiste or “Pomp”, which means “Little Chief”.  With Pomp in a cradleboard on her back, she walked for hundreds of miles.

On October 30, 1805, William Clark’s journal states “Squar found and brought me a bush something like the current, which she said bore a delicious froot and that great quantities grew on the Rocky Mountain.” There are many records in Clark’s journal that Sacajawea collected foods “which the Shoshone eat” (June 25, 1806) and were native to her mountain homelands.

Perhaps her most important contribution was keeping peace between the expedition and the native people just by being there with Pomp.  The native people knew that the white men had not come to fight since they were traveling with a woman and a baby.

Sacajawea met her Shoshone brother Cameahwait along the journey.  Camehwait, was a chief of the Shoshone and did not like the white men. Sacajawea persuaded him to lend the expedition horses and supplies to travel across the mountains.

There are more monuments, statues, state parks and rivers dedicated to Sacajawea than any other American woman.

This page may be cited as:
Women in History. Sacajawea biography. Last Updated: 9/25/2022. Women In History Ohio.
<http://www.womeninhistoryohio.com/sacajawea.html>