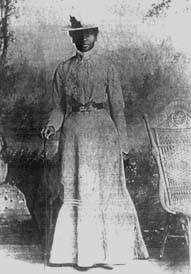 Mary Elizabeth Bowser was born as a slave to owner John Van Lew, a wealthy hardware merchant. His daughter, Elizabeth, and her mother freed her father's slaves after his death in 1843 or 1851 (sources differ). Accounts record the Van Lew women buying members of their slaves' families from other owners, when they found out they were going to be sold, and then freeing them. Another former slave named Nelson went North with Mary after the Civil War; some sources believe this was her father.

Mary remained with the Van Lew family after she was freed and worked as a paid servant. Elizabeth sent Mary to the Quaker School for Negroes in Philadelphia in the late 1850s.

After graduating, Mary returned to Richmond and married William or Wilson Bowser, a free Black man, on April 16, 1861 -- just days before the Civil War began. The ceremony was highly unusual because the church parishioners were primarily white. They settled down just outside Richmond, and Mary continued to work in the Van Lew house.

After the war began, Elizabeth Van Lew asked Mary to help her in the elaborate spying system she had established in the Confederate capitol. Despite Elizabeth being a staunch abolitionist and loyal to the Union, she was a prominent member of Richmond because of her father's wealth and status. But her views and actions (attending to Union soldiers at Libby Prison with food and medicine, in particular) earned her the enmity of her community. Elizabeth used this to her advantage -- taking on a slightly crazy, muttering, slovenly personae that earned her the nickname "Crazy Bet" -- to cover up her serious efforts to help the Union. In addition to the industrious spying and aiding Union prisoners (while also gleaning information from the captives), Elizabeth also helped escaped prisoners by hiding them in a secret room in her mansion. She wrote her information in cipher code, hid the messages in the soles of servants' shoes or hollowed egg shells, then had the notes relayed to Union officers through several helpers and agents.

Mary had considerable intelligence, as well as some acting skills. In order to get access to top-secret information, Mary became "Ellen Bond," a dim-witted, also slightly crazy, but able servant. Elizabeth had a friend take Mary along to help at functions held by Varina Davis, the wife of Confederate President Jefferson Davis. Mary proved herself well and was eventually taken on full-time, working in the Confederate White House until just before the end of the war. Of course, they assumed she was a slave.

With the racial prejudice of the day, the assumption that slaves were illiterate and not intelligent, and the way slave servants were trained to seem invisible, Mary was able to glean considerable information simply by doing her job. While serving meals and cleaning up after, she overhead conversations about troop strategy and movement between the president and his advisors and military officers. Being literate, she was able to read letters and documents that were left out in the president's private study. She memorized everything word for word. Apparently President Davis came to realize there was a leak in the house, but did not suspect Mary until late in the war.

Mary passed her information to either Elizabeth, whom she met occasionally at night near the Van Lew farm just outside Richmond, or Thomas McNiven, a reputable Richmond baker. With his business, both at the bakery itself and while making deliveries, he was able to receive and pass on secrets without suspicion. In his stops at the Davis household, Mary would greet him at the wagon and talk briefly. Just before he died in 1904, Thomas told his daughter Jeannette about these activities, and she in turn told her nephew, Robert Waitt Jr., who recorded them in 1952. According to Thomas, Mary was the source of the most crucial information available:

"...as she was working right in the Davis home and had a photographic mind. Everything she saw on the Rebel president's desk, she could repeat word for word. Unlike most colored, she could read and write. She made a point of always coming out to my wagon when I made deliveries at the Davis' home to drop information."

Toward the end of the war, suspicion finally did fall on Mary, although it is not known how or why. She fled in January 1865, but she attempted one last act as a Union spy and sympathizer. She tried to burn down the Confederate Capitol, but was unsuccessful.

After the war, the federal government destroyed the records of Southern spy activities, to protect their lives -- including Mary, Elizabeth and Thomas. This is why details are missing in their stories. Several sources state that Mary recorded her spying activities in a diary, but family members inadvertently discarded it in 1952. Other sources say the family destroyed them on purpose because they were afraid they might fall into the wrong hands. And still other sources say the diary still exists, in the possession of a Black family that refuses to release it. Apparently, the Bowser family rarely discussed her work -- even among family members -- fearing retaliation from lingering Confederate sympathists, and given the political and social climate in the South. There is no record of Mary's life after the war, or her death. It is thought that she returned to the North (Philadelphia?).

In 1995, the U.S. government honored Mary Elizabeth Bowser for her efforts by inducting her in the U.S. Army Military Intelligence Corps Hall of Fame in Fort Huachuca, Arizona. During the ceremony, her contribution was described thus:

"Ms. Bowser certainly succeeded in a highly dangerous mission to the great benefit of the Union effort. She was one of the highest placed and most productive espionage agents of the Civil War. ... [Her information] greatly enhanced the Union's conduct of the war. ... Jefferson Davis never discovered the leak in his household staff, although he knew the Union somehow kept discovering Confederate plans." 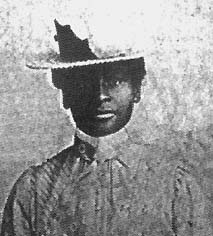 This page may be cited as:
Women in History. Mary Elizabeth Bowser biography. Last Updated: 1/14/2013. Women In History Ohio.
<http://www.womeninhistoryohio.com/mary-elizabeth-bowser.html>