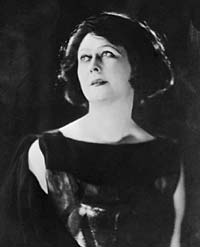 Dora Angela Duncan was the second daughter and the youngest of four children to parents Joseph Charles and Dora Gray Duncan. Her father was a poet and her mother was a pianist and music teacher. When Isadora's parents married, her father was divorced with four children and 30 years her senior. He supported his family through running a lottery, publishing three newspapers, owning a private art gallery, directing an auction business and owning a bank. When the bank fell into financial ruin, he abandoned Isadora's family, moved to Los Angeles where he divorced and remarried again.  Isadora did not believe in marriage but did have love affairs with stage designer Gordon Graig and millionaire (Paris) Eugene Singer and had a child by each. Her children, Deirdre and Patrick were tragically and accidentally drowned in 1913 while with their English governess. Later in her life she married Russian poet, Sergei Esenin in 1922 but separated shortly after.

EDUCATION:  As a child, she learned unconventionally to "listen to the music with your soul."  Her mother instilled in Isadora a love for dance, theater, Shakespeare and reading. At the young age of 6 years old, she danced for money and taught other children to dance. Dancing lessons took precedence over formal education;  however, she read and was inspired by the works of Walt Whitman and Nietzsche.

ACCOMPLISHMENTS:  Isadora is known as the mother of  "modern dance," founding the "New System" of interpretive dance, blending together poetry, music and the rhythms of nature.  She did not believe in the formality of conventional ballet and gave birth to a more free form of dance, dancing barefoot and in simple Greek apparel. Her fans recognized her for her passionate dancing and she ultimately proved to be the most famous dancer of her time.

In 1895 Isadora and her family moved east to pursue her professional dancing career. She opened In New York as a fairy with August Daly's company in A Midsummer Night's Dream. She was also funded by wealthy New Yorkers to give private appearances. In 1898 she expanded her dancing career by traveling to London on a cattle boat with her mother, her sister Elizabeth and brother, Raymond. Her first professional European performance was at the Lyceum theater in London on February 22, 1900. She turned down substantial dancing offers to join Loie Fuller's touring company and toured Budapest, Vienna, Munich and Berlin. She studied for one year in Greece where she purchased Kopanos Hill outside of Athens to construct an elaborate dancing stage. Her performances were based on interpretations of classical music including Strauss' Blue Danube, Chopin's Funeral March, Tchaikovsky's Symphonie Pathetique and Wagnerian works.

Later in her life she opened a dancing school in Moscow where the Russian government promised to provide her with room and board and a schoolroom. However, after the school was built the government did not support her. To support herself, she returned to the stage unsuccessfully in America and then toured Europe once more.

Isadora's writings included The Dance,  in 1909;  My Life,  her autobiography in 1927;  various periodical articles on dancing;  and The Art of the Dance a memorial volume published in 1928.

"People do not live nowadays. They get about ten percent out of life." ~ Isadora Duncan

This page may be cited as:
Women in History. Isadora Duncan biography. Last Updated: 1/26/2013. Women In History Ohio.
<http://www.womeninhistoryohio.com/isadora-duncan.html>